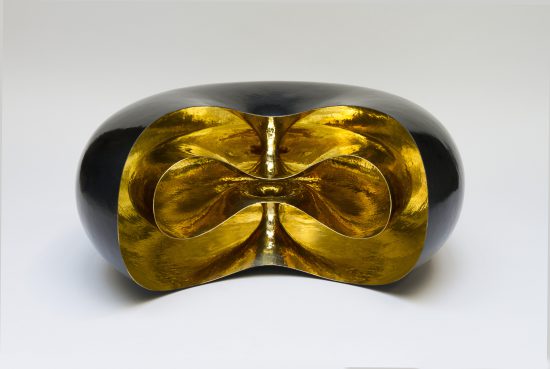 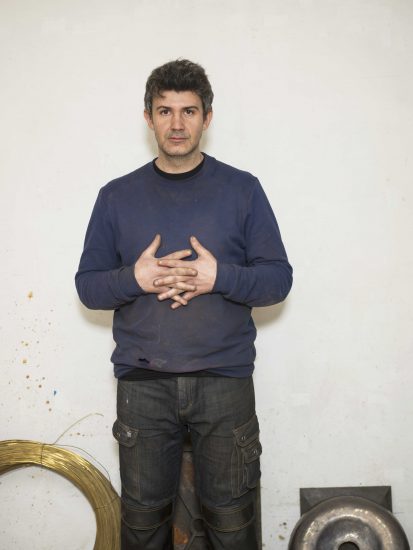 First attracted by drawing and colour, Nathanaël Le Berre began his artistic studies in 1995 by learning stained glass at the Olivier de Serres school (ENSAAMA) in Paris. In 1997, he joined the metal sculpture workshop where he became passionate about the technique of copperware. Seduced by Hervé Wahlen’s sculptures, he met him at the ENSAAMA jury, which offered to help him in his workshop in Montreuil.

For two years, Nathanaël completed his teaching by working with Hervé Wahlen, then created his first sculptures in copperware.

In 2001, he joined the Ateliers Bataillard as a designer in art ironwork, part-time, until 2007.

Through Hervé Wahlen, he acquired the hammers that had belonged to René Gabriel Lacroix and occupied a workshop in Montreuil.

He exhibited his first sculptures in 2004 at the Triode gallery, rue Jacob in Paris. In 2009, a collaboration began with the Christian Liaigre design office, which gave him the opportunity to present sculptures in its Paris showrooms and to make special orders. In 2010, he moved his workshop to Aubervilliers. Since 2011, her sculptures are presented at the gallery Patrick Fourtin, then at the Michèle Hayem gallery in Paris.

In June 2014, he is the winner of the Liliane Bettencourt Award for Hand Intelligence, “exceptional talent” category. This award is the fruit of many years of questioning a technique at the service of decorative arts.
In September 2017 he presents eight sculptures at the Tokyo National Museum for the exhibition “Wonder Lab”, then at the National Museum of China in October 2018.

In September 2018 Nathanaël Le Berre participates in the exhibition “Homo Faber” at the Fondazione Giorgio Cini on the island of San Giorgio Maggiore in Venice, organized by the Michelangelo Foundation.

錫製品の素材について / About the Materials Used in Pewter Products

Regarding Orders and Shipment for Overseas Customers

At Seikado, international orders and overseas shipment are conducted through the purchasing agency.

This website uses cookies to improve your experience while you navigate through the website. Out of these cookies, the cookies that are categorized as necessary are stored on your browser as they are essential for the working of basic functionalities of the website. We also use third-party cookies that help us analyze and understand how you use this website. These cookies will be stored in your browser only with your consent. You also have the option to opt-out of these cookies. But opting out of some of these cookies may have an effect on your browsing experience.
Necessary 常に有効
Necessary cookies are absolutely essential for the website to function properly. This category only includes cookies that ensures basic functionalities and security features of the website. These cookies do not store any personal information.
Non-necessary
Any cookies that may not be particularly necessary for the website to function and is used specifically to collect user personal data via analytics, ads, other embedded contents are termed as non-necessary cookies. It is mandatory to procure user consent prior to running these cookies on your website.
SAVE & ACCEPT